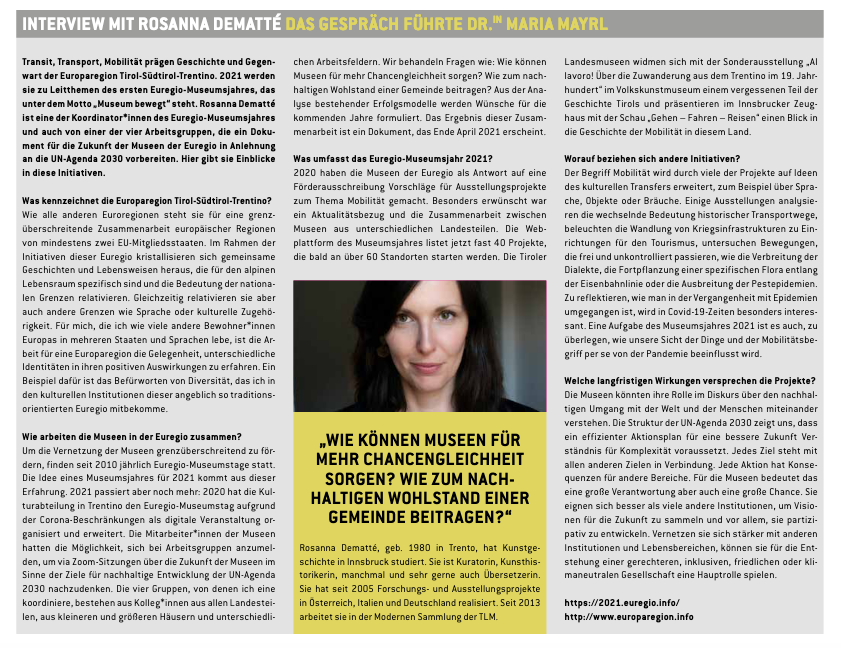 Read the hole magazine in German

Rosanna Dematté is one of the coordinators of the Euregio Museum Year in Tyrol-South Tyrol-Trentino and also of one of the four working groups that are preparing a document for the future of the museums of the Euregio based on the UN Agenda 2030. Here she gives an insight into these initiatives.
What characterizes the European region Tyrol-South Tyrol-Trentino?
Like all other Euroregions, it stands for cross-border cooperation between European regions of at least two EU member states. Within the framework of the initiatives of this Euregio, common stories and ways of life emerge which are specific to the alpine habitat and which relativize the importance of national borders. At the same time they luckily relativize other boundaries such as language or cultural affiliation. For me, who, like many other inhabitants of Europe, live in several countries and languages, working for a European region is the opportunity to experience different identities and their positive effects. One example of this is the advocacy of diversity that I see in the cultural institutions of this supposedly tradition-oriented Euregio.
How do the museums in the Euregio work together?
Since 2010, Euregio Museum Days have been held annually to promote cross-border networking between museums. The idea of ​​a museum year for 2021 comes from this experience. But more will happen in 2021: In 2020, the culture department of the Province of Trentino organized and expanded the Euregio Museum Day as a digital event due to the Corona restrictions. The museum workers had the opportunity to join working groups in order to think about the future of museums in the sense of the Sustainable Development Goals of the UN Agenda 2030 via zoom sessions. The four groups, one of which I coordinate, consist of colleagues from all parts of the country, from smaller and larger houses and different different fields of work. We deal with questions such as: How can museums ensure more equal opportunities? How do you contribute to the sustainable prosperity of a community? Wishes for the coming years are formulated from the analysis of existing best practices. The result of this collaboration is a document that will appear in May 2021.
What does the Euregio Museum Year 2021 include?
In 2020 the museums of the Euregio submitted proposals for exhibition projects on the subject of mobility in response to a call for funding.
Many of the over 40 projects extend the term mobility to ideas of cultural transfer, for example through language, objects or customs. Some exhibitions analyze the changing significance of historical transport routes, illuminate the transformation of war infrastructures into facilities for tourism, examine movements that happen freely and uncontrolled, such as the spread of dialects, the reproduction of a specific flora along the railway line or the spread the plague epidemics. Reflecting on how epidemics have been dealt with in the past becomes particularly interesting in times of Covid-19. One of the tasks of the Museum Year 2021 is to consider how our view of things and the concept of mobility per se will be influenced by the pandemic.
What long-term effects do the projects promise?
The museums could understand their role in the discourse on how people should deal with the world and support each other in a sustainable manner. The structure of the UN Agenda 2030 shows us that an efficient action plan for a better future requires an understanding of complexity. Each goal is related to all other goals. Every action has consequences for other areas. For the museums this means a great responsibility but also a great opportunity. They are better suited than many other institutions to collect visions for the future and, above all, to develop them in participatory ways. If they network more closely with other institutions and areas of life, they can contribute to the emergence of a more just, inclusive, peaceful or climate-neutral society.

iThere are no comments