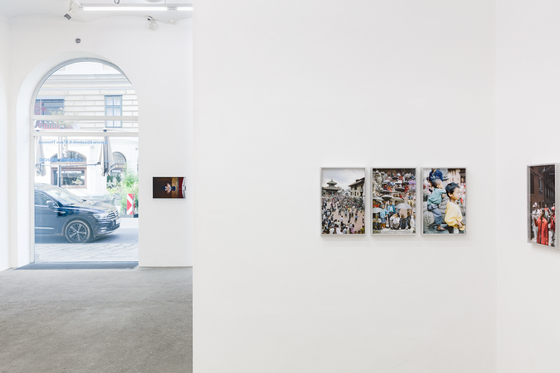 Text on the exhibition, by Rosanna Dematté

Christoph Schlingensief’s production of Richard Wagner’s Parsifal premiered in Bayreuth in July 2004, acclaimed and misunderstood, as many of his works had been before. Less well known to this day is the journey the director took in 2003 through Nepal and Thailand in search of Parsifal and Kundry. Seventeen years later, Carmen Brucic tells about it in this exhibition. The joint research had begun in Bayreuth when a stock of Hindu literature was discovered in Wagner’s library at Villa Wahnfried, where Carmen Brucic took a later very famous photo of Schlingensief on Liszt grand piano. The sequence of the journey is due to the advice of the ethnomusicologist and Nepal expert Gert-Matthias Wegner.

Extract from a conversation between Christoph Schlingensief and Gregor Gysi on ZDF, a german-state television station, about Schlingensiefs experiences throughout the production in Bayreuth:

“I was in Nepal, where they celebrate a reincarnation festival. (…) You experience Bhaktapur – near Kathmandu – a region with 62 ethnic groups (…). The terrain was interesting because, as a Catholic, I naturally always walk to the altar and then that’s it, suddenly somehow there’s marble. But they walk through it. They have over 5000 gods. (…) It was a gigantic mess of creeds, a maelstrom of events. And then the question of salvation: I practically studied what salvation is. I had not found that there. We always talk about salvation, politics wants salvation, everyone wants salvation, but I don’t believe in it. (…) There are only productions of Parsifal that were always so smudged with Christianity, and then I simply thought that we had to get into something concrete, something spiritual and perhaps also something metaphysical. But they thought I would come and put BDM-girls and swastikas on stage, then they would have been satisfied. (…) But that was exactly what it was not! It was about redemption and the question, what is this compassion that Parsifal should learn. What is this compassion towards the disabled? What is the compassion towards Jesus? Why did someone, crossed for three days suffer more than someone who lives a lifetime in a wheelchair or as a coma patient, what is the difference in suffering? How am I supposed to suffer at all, I can’t even have a say in it. These questions were all inside.“

Critics seemed to understand the new context. Claus Spahn described the production as a “Bayreuth chicken massacre” and “dark ritual in big city rubbish” (DIE ZEIT 32, 29.7.2004). Reinhard J. Brembeck ascribed Schlingensief “a syncretistically worldly stage consecration festival”, “which corresponds to religions practised today in many countries beyond the First World”, whereby the director redeemed Wagner’s work “from pseudo-Christian pretence as well as from all enlightened attempts to drive out every religious level from this play”. And yet “this salvation in the field of images, as in every religion, must be followed uncritically and purely emotionally.“ (Süddeutsche Zeitung, 27.07.2004).

The sentences quoted above from the article by Reinhard Brembeck offer the right path to understanding Carmen Brucic’s photographic work. The photographs have been taken over the last twenty years in Brazil, Mexico, Spain, Italy, Austria and some other countries. They draw a non-religious and yet “religion-touching” path of human salvation promised by the opposites proximity and distance, love and separation, farewell and departure. Her work is characterised by an unmistakable poetics that transforms photographic image details into baroque monuments. In this early photographic series, the separation between earth and sky becomes fluid in a baroque manner. The horizon is only briefly visible at the beginning of the journey: Christoph Schlingensief in a boat, before diving into a world in which dimensions will mix.

A series of photographs shows Schlingensief in Bhaktapur: both lost today, the man by his death in 2010, the Nepalese city mostly in the earthquake of 2015. Brucic’s photographs preserve the old state of the city and at the same time its potential as a stage. As a Situationist space of salvation, in which the waiting faithful, the embodied goddesses and the director who wants to break through the altar can find a place. In the arriving procession the young Parsifal is found in leopard garb. In calm moments, the view of other children in the streets of Bhaktapur becomes important for research – simply because of their lack of attributes, their lack of religious instrumentalisation, their uniqueness and dignity. The director stops at a nearby restaurant, makes a phone call about the CHURCH of FEAR, the famous unconventional moral action on the collective confession of fear, which began in Venice that same year and continued throughout this journey.

The temples in Bhaktapur provide the possible stage architecture, including details from the temple complex Swayambhunath in Kathmandu, including the stupa and the painted eyes. Brucic’s gaze stages the wide squares and temple complexes of Bhaktapur like a stage designer, and yet the recognition of the ephemeral nature of each image hurts. Above all, the director seems to be struggling to immortalise the staging. He interferes with the image and yet, alongside the brazen locals, who are composing perfectly, he seems like a fleeting foreign body. He then even reacts to the transience of the moment and immortalises the Nepalese setting by buying trousers with a classic piece by Thomas Bernhard: Schlingensief “buys himself a pair of trousers and has dinner with me”.

An elderly Kundry appears to Brucic and Schlingensief in the Himalayan days, before the density of Bangkok will capture both’s attention. In Thailand, the research with Schlingensief leads to a street market. Here it can no longer be overseen that Schlingensief has been filming Brucic with a small video camera all the time while she was taking photographs. This certainty goes hand in hand with the feeling that countless perspectives on the same story should and still exist, with the feeling of standing on a revolving stage. Carmen Brucic’s work, which is being shown in an exhibition for the first time, illuminates Schlingensief’s research on Parsifal as a new kind of panopticon, a notion of the director’s ability to finally break with the uniformity of the Western gaze.

Carmen Brucic (born 1972) is known both as a photographer and for her participatory working methods. A fruitful combination of photography, theatre, staging and performative intervention characterises her work. Since 2001 Brucic has been realising artistic and scientific formats on emotional themes, which she develops in various media. For important European theatres she has conceived and directed unique congresses such as “LovepangsTM. Ausrufung der liebeskranken Gesellschaft”, for the first time at the Volksbühne am Rosa-Luxemburg-Patz in Berlin, where she met Christoph Schlingensief. Her artistic work as a photographer has been shown in Austria, Germany, Slovenia, Switzerland, Belgium, Mexico and the USA. She lives and works in Innsbruck and Gnadenwald.

iThere are no comments